What The Walking Dead taught me about writing

Most of the second half of Season 6 of The Walking Dead didn't make sense.

Most of the characters we know and love acted like they'd lost their minds.

And I'm not alone in thinking it.

The last few episodes leading up the Walking Dead season 6 finale had a lot of people screaming at their TV screens. The reason - the characters that viewers know (probably as well as most family members) and love started acting out of character.

Take Rick Grimes. He goes after Negan's gang not even knowing who exactly they are, what Negan looks like and whether his group will be outnumbered and outgunned.

Does that make any sense for such a shrewd leader? No way, Jose.

Then there's our beloved Daryl Dixon. With the big bogey man coming in the shape of comic villain Negan (did Rick Grimes really think the red shirt he killed so easily in a previous episode was dictator Negan - I doubt it), Daryl Dixon decided to go after Savior Dwight who killed Dr Denise with an arrow to the head. Daryl believed he'd caused her death by not killing Dwight when he had the chance.

If Daryl Dixon had gone after his zombie apocalypse soulmate, Carol, that'd have made sense. But getting justice for Denise, I just don't see it.

Rick and Daryl weren't the only ones behaving out of character.

Carol, the mother of the group, decides to leave Tobin a Dear John letter and quit Alexandria. Bully Negan's heading their way, but hey she can't kill for anyone any more. Even though she's pretty good at it.

Soldier Abraham doesn't even suggest they do some fact-finding on Negan and his band of thieves before they kill some of his cohorts whilst they're sleeping.

There's no due diligence like, "Hey, Rick shouldn't we check the guy you're about to kill genuinely is the Big, Bad Wolf?" 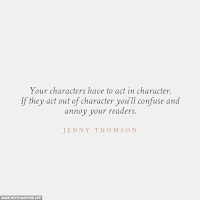 Annoying isn't it when characters are manipulated like that, and unsatisfying.

And that's why so many fans like me are angry with The Walking Dead - we know these characters and how they'll react and its not how they've been acting on the show.

Rick would find out everything he could about Negan before he went after him.

Daryl wouldn't go and get himself and a lot of his friends taken.

Carol would kill again - even if it was one last time.

Abraham would say to Rick, "We need to do this right."

Michonne getting caught? No way.

No matter what you're writing, your characters have to act in a believable way. Rick, Daryl, Carol and Abraham haven't been doing that.

Their characters have been messed with to make the story go a certain way and that leaves viewers disappointed.

As a writer, you don't want your readers to feel the same way. They'd be perfectly entitled to throw your book across the room.

Characters must be consistent and if they change, there must be a very good reason for it.

Good storytelling has to make some sense, or your readers will be left disappointed.

Email ThisBlogThis!Share to TwitterShare to FacebookShare to Pinterest
Labels: Carol, Daryl Dixon, Rick Grimes, Tags - am writing, the walking dead, what The Walking Dead Season 6 taught me about writing, writing a novel

Detective in a Coma 1

Available in paperback or eBook

Meet Kirsty: the one-legged barmaid on the run 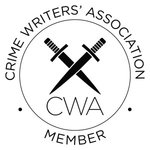 ZOMBIES IN GLASGOW! How will the zombies survive?